This is the blog for Mikkel Flindt Heisterberg about everything and nothing. More detailed info about me, incl. bio, can be found on the about me page. Please also read the disclaimer.

All views and opinions on this blog are definitely my own and does not necessarily reflect those of my employer.

As previously mentioned (Sametime 7.5.1 tabbed interface is loosing messages!) I upgraded to Sametime Connect 7.5.1 and began loosing chat messages when using the new tabbed chat interface. I was kindly informed by Hans-Peter Kuessner from Domblog.de of two IBM patches for the issue. I contacted Lotus Support and requested the hotfixes and promptly received them. I have provisioned the hotfix to my users using the automatisk provisioning built into Sametime 7.5. The automatic update of user Connect clients has worked like a charm and the patch has solved the issue. Nice!

Only feature I could see the need for would be some way to see which users have installed the patch and who haven’t. Of cause users do not have the option of not installing the patch but still it would be nice to know how many of the users have been updated. Some might be connecting from home where they might not have access to the update site. I haven’t checked the log so strictly speaking I don’t know if it’s there but somehow I doubt it. 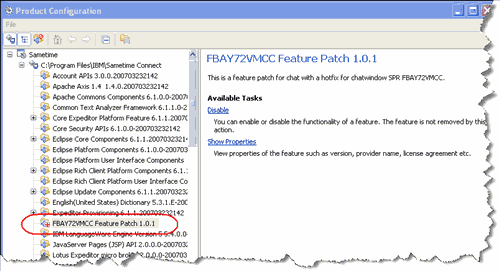